This Employment Blog comes from the US Department of Labor, Bureau of Labor Statistics. The unemployment rate declined to 3.7 percent in September, and nonfarm payroll employment increased by 134,000. Job gains occurred in professional and business services, in health care, and in transportation and warehousing. Incorporating revisions for July and August, which increased nonfarm payroll employment by 87,000, monthly job gains have averaged 190,000 over the past 3 months.

This summarized in Charts 1 and 2 below. 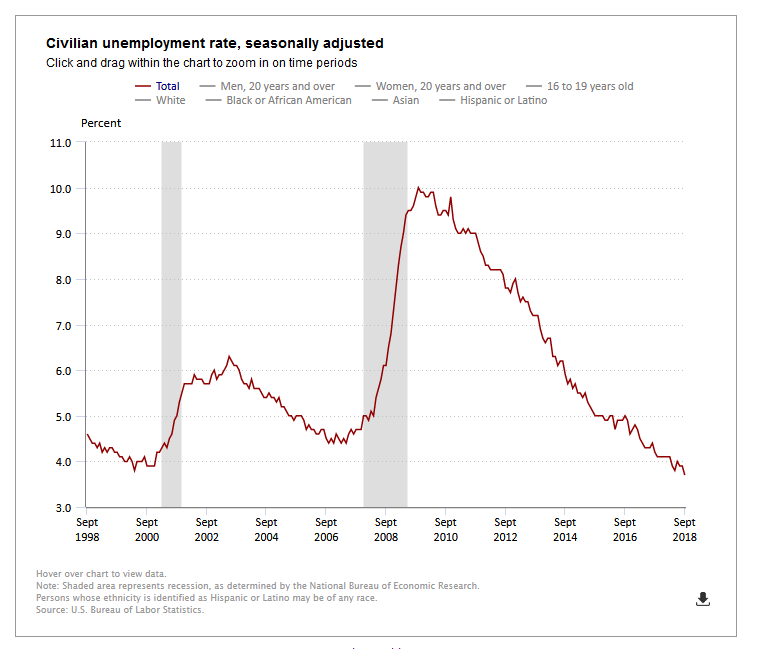 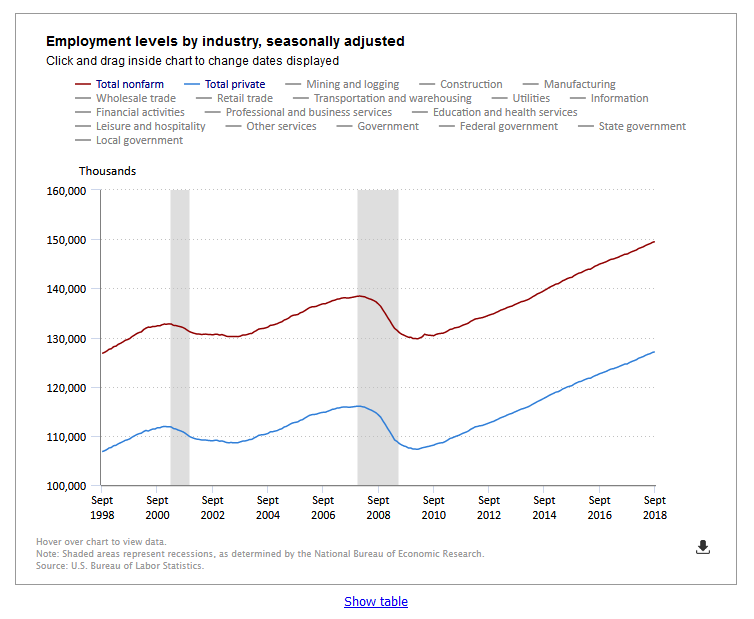 Hurricane Florence made landfall on the East Coast on September 14–duringthe reference period for both the establishment and household surveys–causing large-scale evacuations and severe damage to many homes and businesses. Response rates for the two surveys were within normal ranges. It is possible that payroll employment in some industries was affected by the hurricane; however, it is not possible to quantify the net effect on employment.

Employment in construction continued to trend up in September (+23,000). Over the year, construction employment has increased by 315,000.

Within mining, support activities for mining added 6,000 jobs in September.

Employment in leisure and hospitality was little changed over the month (-17,000). Prior to September, employment in the industry had been on a modest upward trend. Some of the weakness in this industry in September may reflect the impact of Hurricane Florence.

Employment in other major industries—including wholesale trade, retail trade, information, financial activities, and government–showed little or no change over the month.

Turning to measures from the survey of households, the unemployment rate declined by 0.2 percentage point to 3.7 percent in September.

The labor force participation rate held at 62.7 percent in September,and the employment-population ratio, at 60.4 percent, was little changed. In September, there were 4.6 million people working part time for economic reasons (also referred to as involuntary part-time workers). Although this measure was up by 263,000 over the month, it has been trending down over the year and is 506,000 lower than a year ago.

Among those neither working nor looking for work in September, 1.6 million were considered marginally attached to the labor force, essentially unchanged from a year earlier. Discouraged workers, a subset of the marginally attached who believed that no jobs were available for them, numbered 383,000 in September, also about unchanged from a year earlier. (Marginally attached to the labor force refers to people who had not looked for work in the 4 weeks prior to the survey but wanted a job, were available for work, and had looked for a job within the last 12 months.) In summary, the unemployment rate declined to 3.7 percent in September, and nonfarm payroll employment increased by 134,000.