The unemployment rate declined by 0.2 percentage point to 4.5 percent in March. Nonfarm payroll employment edged up by 98,000, following gains in January (+216,000) and February (+219,000). In March, job gains occurred in professional and business services and in mining, while retail employment declined.

This information is summarized in Charts 1 and 2 below. 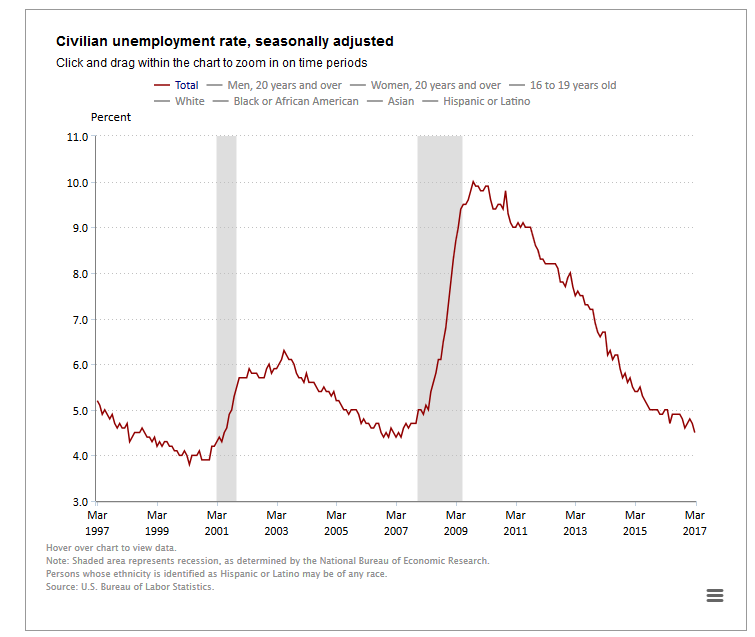 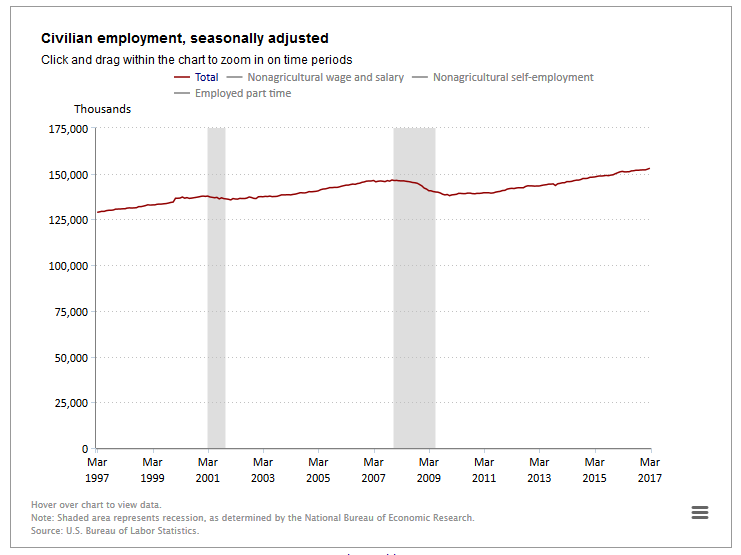 Employment in professional and business services increased by 56,000 in March and has grown by 639,000 over the year. Within the industry, services to buildings and dwellings (+17,000) and architectural and engineering services (+7,000) added jobs over the month.

Mining added 11,000 jobs in March, mostly in support activities for mining. Employment in the industry has expanded by 35,000 since a recent low point in October 2016.

Employment in financial activities also continued to trend up in March (+9,000). Over the year, employment in the industry has increased by 178,000, with much of the gain in credit intermediation and in real estate.

Construction employment changed little in March (+6,000), following a gain of 59,000 in February. Employment in construction has been trending up since late last summer, largely among specialty trade contractors and in residential building.

In March , retail trade employment declined by 30,000. Within the industry, employment in general merchandise stores fell by 35,000 over the month and has declined by 89,000 since last October.

Employment in other major industries–manufacturing, wholesale trade, transportation and warehousing, information, leisure and hospitality, and government–showed little or no change over the month.

Average hourly earnings of all employees on private nonfarm payrolls increased by 5 cents in March, following a gain of 7 cents in February. Over the past 12 months, average hourly earnings have risen by 2.7 percent. From February 2016 to February 2017, the Consumer Price Index for All Urban Consumers (CPI-U) increased by 2.8 percent (on a seasonally adjusted basis).

Turning now to data from the survey of households, both the unemployment rate, at 4.5 percent, and the number of unemployed people, at 7.2 million, declined in March