This Employment Blog is from the US Department of Labor Bureau of Labor Statistics. Nonfarm payroll employment rose by 235,000 in February, and the unemployment rate changed little at 4.7 percent. Job gains occurred in construction, private educational services, manufacturing, health care, and mining.  Incorporating revisions for December and January, which increased nonfarm payroll employment by 9,000 on net, monthly job gains have averaged 209,000 over the past 3 months. See Chart 1 and 2 provide details of the employment and unemployment rates. 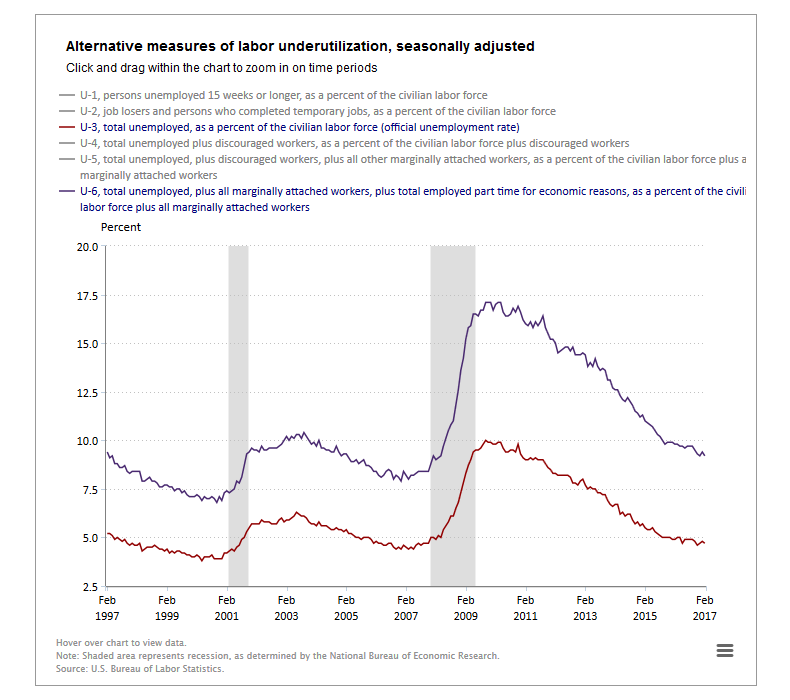 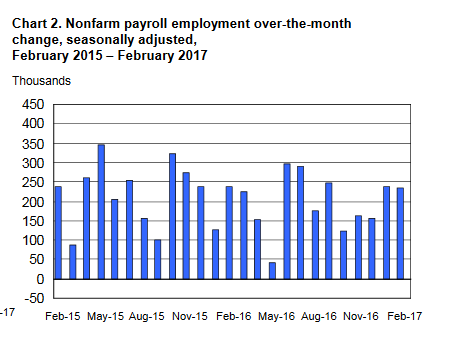 In the goods -producing sector, construction employment rose by 58,000 in February, after increasing by 40,000 a month earlier. Job growth continued among residential specialty trade contractors in February (+15,000). Employment among nonresidential specialty trade contractors grew by 22,000, after changing little in recent months. Job gains also occurred in heavy and civil engineering construction over the month (+15,000).

Employment in manufacturing increased by 28,000 in February. Employment rose in food manufacturing (+9,000) and in machinery (+7,000), while transportation equipment lost 6,000 jobs. Manufacturing has added 57,000 jobs since November.

In the service-providing sector, private educational services added 29,000 jobs in February, following little employment change in January (-5,000). This industry has added 105,000 jobs over the year.

Employment continued to trend up in professional and business services in February (+37,000) and has increased by 597,000 over the year.

Average hourly earnings of all employees on private nonfarm payrolls rose by 6 cents in February, following a gain of 5 cents in January. Over the past 12 months, average hourly earnings have risen by 2.8 percent. From January 2016 to January 3 2017, the Consumer Price Index for All Urban Consumers (CPI-U) increased by 2.5 percent (on a seasonally adjusted basis).